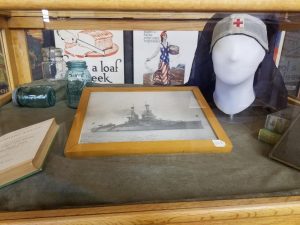 Dubois, Wyoming -   Fort Caspar Museum has organized an exhibit of World War I-era posters to commemorate the 100th anniversary of the U.S. entry into that global conflict.  The posters were created for a domestic audience and depict activities Americans were encouraged to undertake stateside to support the war effort overseas.  "Home Front Posters of the Great War, 1917-1918" consists of thirty framed copies of posters in the collection of the National World War I Museum and Memorial in Kansas City and will be on view at the Dubois Museum now through April 21st.

“Uncle Samuel’s Sons are on Their Way” by HM Clendening and produced by Clendening Music Co. Dubois, WY in 1918, sheet music is on display along with others. For an extra treat, visitors can sample audio clips of the sheet music on an interactive tablet. The tablet also has a speech by James Watson Gerard, American Ambassador to Germany during World War I. The exhibit also highlights the USS Wyoming and the important role that books played on this magnificent battle ship. During WWI everyone got involved in the fight, and on the home front certain food items were limited if they could not be totally removed from daily life. The Red Cross was becoming the organization that we know today and on display is a period appropriate Red Cross uniform veil.

After the exhibit closes in Dubois, the exhibit will continue to travel around Wyoming and the next stop will be Powell.  Communities in our state that will or have hosted the posters to display are Wheatland, Cheyenne, Laramie, Green River, Pinedale, Evanston, Alpine, Dubois, Powell, Riverton, Sheridan, and Gillette.  The exhibit is sponsored by Wells Fargo Bank, the Fort Caspar Museum Association, and the Casper Memorial VFW Post 9439 & Auxiliary.

No category
fcmadmin
Comments are closed
203
0
0
No tags