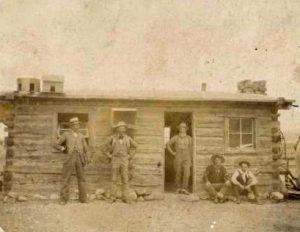 George Yarbarough was raised in the Brooks Lake, Dunior  Valley, Crowheart and Dubois areas. He currently is a volunteer docent at the Pioneer Museum in Douglas, Wyoming.

The Johnson County War and the Wild Bunch are among the top questions that George receives at the museum. The Johnson County War was an attempt by the then ruling class of individuals to stop the newcomers or settlers from changing the game by maintaining the status quo, to freeze time in 1892. Similar examples include Crazy Horse and Sitting Bull trying to halt change in the 1870s, Red Cloud in the 1860s and prior to those times, the Crow tribe resisting the advance of the Sioux and their allies in the early 1800s.

By the late 1800s, might was right: the law of the land was the golden rule, he who has the gold...rules. The once all powerful, absentee, overseas owners of the large, public-land-based livestock operations had been wiped-out by the dry summer of 1886, followed by the hard winter of 1886-1887; only to be replaced by their ex-employees who, knowing an opportunity, were not going to accept new neighbors or homesteaders without a fight. The new arrivals were in direct competition for the limited natural resources, a bloody conflict resulted with many unrecorded atrocities committed by both sides, and desperate people do desperate deeds. When did the Johnson County War end? George thinks it is still occurring...just with lawyers not guns.

The Wild Bunch was a group of loosely organized, well-mounted outlaws that operated mainly in the Rocky Mountain region. The gang could not have moved around the rough terrain so easy without help from the locals, much like Robin Hood. One man’s terrorist is another man’s freedom fighter. Good men can do bad things and bad men can do good things. Did the Johnson County War influence the bandits and their friends? Without a doubt!

Please come share your stories and learn some history with George and everyone else on Saturday, May 19 at 7pm, at the Dennison Lodge. For more information contact the Dubois Museum, 909 West Ramshorn, 307-455-2284 or by email at duboismuseum@gmail.com.

No category
fcmadmin
Comments are closed
209
0
0
No tags