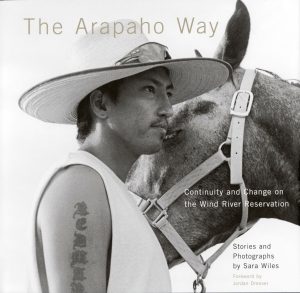 Contemporary photos of Arapaho people will be on display at the Lander Pioneer Museum’s Western Gallery through the fall. The images were taken by Lander photographer Sara Wiles and published in her 2019 book “The Arapaho Way, Continuity and change on the Wind River Reservation.”

The striking black and white images detail life on the reservation today, showcasing the Arapaho people’s resilience and blend of modern and traditional lifeways.

Described as a profound glimpse into Arapaho culture, the 30 plus images and their accompanying narratives, bridge a gap between Indian and non-Indian communities.

Sara’s photographs have been exhibited widely in the United States and Europe. Two major exhibits have been mounted at the Plains Indian Museum of the Buffalo Bill Center of the West in Cody, Wyoming. Her photographs have been accepted into juried art and photography shows across the country, and she has won many awards, including the 2000 Wyoming Governor’s Art Award.

The exhibit will be on display at the Lander Museum through the fall. Call 307-332-3373 for more information or check Facebook at Pioneer Museum, Lander Wyoming.

No category
fcmadmin
Comments are closed
65
0
0
No tags