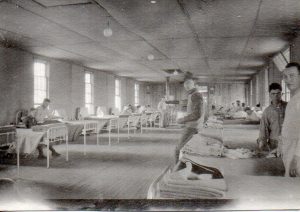 The Spanish Influenza 1917-1920 came in three waves.  The first wave circulated in the fall and spring of 1917- 1918 and seemed like a regular flu season without exceptional mortality. The second wave started in the fall of 1918; the virus had mutated and became much more lethal and contagious. People who had recovered from the first wave exhibited immunity to the second wave.  The second wave was the deadliest wave which reached its peak in the October of 1918.

Symptoms of the Spanish Flu were fever, headache, body ache, pain in the eyes and back, and shortness of breath. This was before the advent of antibiotics so secondary infections such as pneumonia were often fatal.

All ages were susceptible, but young healthy adults between 20 and 40 and pregnant women seemed to be particularly vulnerable to the second wave of flu.  Because so many young adults died of the flu, life expectancy decreased by 12 years in 1918.

On October 25, 1918, the Wyoming State Journal in Lander ran with headline: “R.C. Montgomery (Riverton Heath official) becomes overzealous in his attempt to prevent an epidemic of the Spanish Flu by ordering a quarantine in Riverton.”

A little more than week later, Dr. Thomas Maghee, the doctor serving at the State Training School was appointed the health officer of Lander. He issued a quarantine order that read as follows:

A quarantine, with all its objectionable features is imposed for the object, to stamp out and terminate an epidemic, thus preventing much suffering, and even loss of life.

The prime necessity is to PREVENT CONTACT of infected persons with those who are well.  Therefore, person will not be permitted to assemble on the street corners, in places of amusement or in business houses.

TWO PERSONS are an assemblage under the law.

Persons who have symptoms of the Influenza or who have recently had it, must remain at home or suffer arrest.

Visiting between families and acquaintances must cease at once.  Ladies with children must remain at home and keep their children with them.

Children are absolutely forbidden to be on the streets, or to visit neighbors.  Special arrangements will be made by the authorities when necessary to use a child to send on errands.  Children found on the street, without a permit will be arrested.

Hotels are permitted to allow only the guests from out of town to remain about the lobbies.  And the people of the town must not congregate there.

Merchants will deliver supplies to the quarantined houses, when requested.

Crowds assembling at newsstand, the depot or post office will no longer be permitted. Until further orders, one person ONLY at ANY ONE TIME, will be permitted to enter or remain in a saloon as long as it is necessary to get a drink, nor can persons frequent cigar or candy stand except under the same circumstances.

Lander hired two extra police officers to enforce the quarantine.  Gauze face masks were required to be worn. There was a question about if farmers coming into town without a gauze mask should be arrested.  Church services were suspended, school cancelled, movie theaters and saloons closed and District Court cases were dismissed or rescheduled and juries sent home.  Everyone was required to report any illness among their family or friends.

Even funerals were affected.  Visitors could come to view the remains but only one at a time.

Even though WWI had officially ended, U. S. troops were still stationed in France.  At least two local families received telegrams informing them their soldier had died of flu in France during the quarantine.

Thirty cases of flu were reported in Pinedale, but because of the war there was no attending doctor.

When the quarantine was lifted at the end of December 1918, the Baptist Church scheduled a memorial service for those who died during the epidemic.

There is much debate about where the Spanish Flu originated, but it most certainly did not originally come from Spain. During the war, news from the front was censored, but stories of flu came out of Spain which was neutral during WW I.  The Spanish king had suffered from the flu, so Spain appeared to many people to be the source of the flu pandemic.  The flu probably widely circulated in China during the first wave.  The Second wave of flu in 1918 largely spared China. Another theory points to the French battlefields or even a military camp in Kansas.  Soldiers living in crowded and unsanitary camps may have enabled the spread of the Spanish flu virus of 1918.

Postscript:  Dear Readers, this article was written several weeks ago when quarantine orders were first in effect in China.  As students of history, we can learn from our ancestors.  Dr MacGhee, as health officer made the unpopular decision to put Lander into a strict quarantine, and saved tens if not hundreds of lives.  Today, we are in another pandemic; another quarantine may save many more lives.  Be kind to each other.  We will get through this.

Stay tuned for updates on our programs.

Consider supporting The Dubois Museum, the Pioneer Museum in Lander or the Riverton Museum with a monetary donation.  The museums are more reliant than ever on donations from the private sector to continue to provide the quality programs, collections management, exhibits and services that have become their hallmark. Please make your tax deductible contribution to be used specifically for the benefit of the museum of your choosing by sending a check to Fremont County Museums 450 N 2nd Rm 320 or taking it directly to the museum you choose to support.

No category
fcmadmin
Comments are closed
219
0
0
No tags