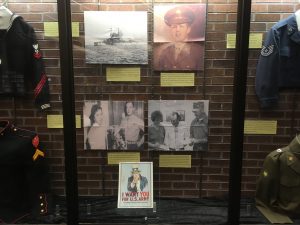 The Riverton Library contains an exhibit organized by the Riverton Museum near the entrance that rotates on a six month basis.  The current exhibit on display at the library honors the local heroes of Riverton who served our country in the military.

One photograph pulled from the museum’s collection is a colorized photograph believed to be of Herman F. Stratton who served in the Air Force in World War II.

No category
fcmadmin
Comments are closed
199
0
0
No tags