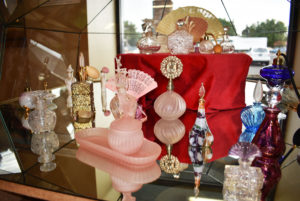 The Lander Pioneer Museum has a new lobby exhibit of perfume bottles and make-up accessories. The exhibit will be on display through the fall. The origin of makeup and perfume go back some 6000 years to Egyptian peoples.

The use of makeup has fallen in and out of social favor throughout history, tied to religious doctrines and the philosophy of Stoicism along with the traits of vanity and selfishness.

Most early societies embraced self-care, the use of deodorant and moisturizers, but hailed a person should enhance their natural appearance but not decorate it.

By the early 1400s makeup was culturally embraced around most of the world. Queen Victoria disapproved of makeup so for a time in parts of Europe and American it became unpopular.  Then came the roaring 1920s when red lipstick and dark eyeliner returned to the Anglo-American world.  The beauty industry took firm hold in America and advertisers sold makeup as a woman’s necessity, still attention getting but not wicked or selfish.

This exhibit would not be possible without the loving donations of the families of Victoria (Dickey) Casey-Connors, 1928-2022 of Riverton and Shirley Jean Beers-Heckart, 1936-2022 of Riverton, South Pass, and finally Lander.

Dickey Connors collected objects made of celluloid. Celluloid or French Ivory is a plant-based camphor pre-plastic that was used in manufacturing between the 1860s to the 1950s.

No category
fcmadmin
Comments are closed
45
0
0
No tags