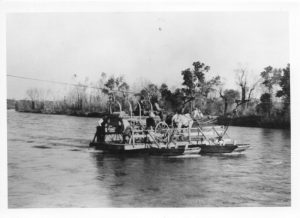 Joshua Terry was born in 1825 in Ontario, Canada.  He was an early convert to Mormonism, and came to Wyoming Territory sometime before 1851 when he met Jim Bridger at Fort Bridger.  Bridger offered Joshua a job, and Joshua worked as a trapper and a trader with the Native Americans for two years.  He learned to speak Shoshone and worked as an interpreter. Joshua settled around Fort Bridger and took a Shoshone woman, Ann Greasewood as a wife.  She was young and beautiful, and Joshua traded two blankets and a gun for his first wife. During this time, he became a friend of Chief Washakie. Joshua celebrated his wedding and acceptance into the tribe with feasting and dancing and sharing a jug of the “juice of life.”

Joshua settled down and ran a ferry and trading post on the Green River for several years and made a good income ferrying hundreds of gold seekers across the river.  His son, George Terry was born on February 1st 1853, and a daughter, Jane was born on April 26, 1855.

One day, Ann’s relatives stopped by the Terry home while on a hunting trip.  Ann took her children and returned with her relatives to visit her people.  She was gone for two years and refused to return to Joshua.

Joshua took a second wife, a widowed woman, Mary.  He sold his ferry business and moved to Draper, Utah where he built a cabin and started clearing the land for a farm and orchard.  His native friends and relations would occasionally stop by when travelling through.  One day Ann’s brother came for a visit and discovered Joshua had taken a second wife.  He relayed this information to his sister who then decided to return to her husband.  She returned with her children in the company of several members of her tribe.

There was quite a bit of jealousy and animosity between the two wives, and Ann plotted to kill her white rival with the help of her Native American companions.  One day while Mary was preparing the midday meal and Joshua was in the fields, a male Native American came after Mary with a butcher knife. Mary heard him sneaking up behind her.   To defend herself, Mary reached for a basin of boiling water and threw it on her attacker. He yelped in pain and dropped the knife. Mary then took a poker and bravely fought him off.

Joshua heard the commotion and hurried home to find Native Americans trying to set his cabin on fire.  He grabbed his gun and ordered them to leave.  Ann decided to stay with Joshua and took up residence in an Indian lodge with her children.  Joshua agreed to let her stay, because he wanted to keep his children close.

Joshua bought western style clothes for the children, but Ann destroyed them and dressed the children in the native style complete with war paint. According to his memoirs, Joshua gave Ann a talking to which is a euphemism for a beating, and then she behaved. Soon, Ann became Ill and died of consumption.

George and Jane were raised by Joshua and Mary with their half- brother and sisters.  They were educated and raised in the Mormon faith.  Joshua eventually became a bishop in the Mormon church.  There will be more about George Terry in a later lookback.

Check out more of our #lookback content on County10 and ReDiscover the Winds with Fremont County Museums.

No category
fcmadmin
Comments are closed
559
0
0
No tags