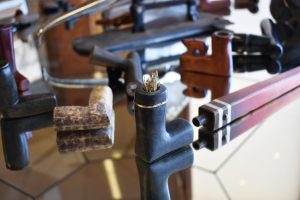 A pipe is not just an instrument used for smoking; it is as much a form of art and a cultural symbol of friendship, hospitality and peace. A new exhibit at the Lander Pioneer Museum explores historic pipes, many used by Native American people, soldiers and pioneers. The oldest pieces in the exhibit are hundreds of years old, the most recent pipes date from the 1870's.

Pipe smoking in North America may go back as far as 3000 years. People who lived in regions where tobacco was a native perennial plant utilized the plant for its narcotic properties.

Tobacco was used for leisure, for medicine, as an appetite suppressant, for ceremonial and religious ceremonies. These people traded or gifted tobacco to people from other regions who they encountered.

The first European explorer’s to the America’s encountered people who used smoking and tobacco in their cultural practices. These explorers brought tobacco and pipe smoking back to Europe.

Referred to as ‘tobacco drinking’, by the early 1700's the pipe making and tobacco cultivation industry was developed.

Tobacco became a form of currency and pipes were mass produced in both the United States and Europe.

Some of the clay pipes on display were made in Ohio and the Carolinas, then brought west by Mountain Men and other traders. Soldiers stationed on the frontier often smoked and would bring pipes with them from the east or buy them at fort sutlers. Several pipes on display were found along the Oregon Trail near South Pass and were likely used by pioneers along the trail, or soldiers that patrolled the trail.

A traditional twist or plug of tobacco is on exhibit. It was easier to store and transport the plant that way in the early days of Westward expansion. Tobacco was an important trade good between tribes, and between white merchants and Native Americans as well as settlers.

On display are a large number of Native American pipes, many from this area. Native people smoked tobacco (often traded over long distances from other tribal groups), and other native plants depending on the ceremony.

The exhibit shows a wide variety of Native American pipe materials, from catlinite, a reddish stone, to clay, steatite (a soft easily carved stone) or metal.

Boney Earnest (with pipe) and his wife Mattie who ranched along the Sweetwater River.

Part of the new pipe exhibit at the Pioneer Museum in Lander.

No category
fcmadmin
Comments are closed
171
0
0
No tags