Grand Opening of the Washakie Gallery 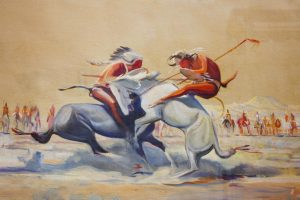 Twenty three epic paintings about the life of Chief Washakie by famed western artist J.K. Ralston will soon be on permanent display in the new Washakie Gallery at the Lander Pioneer Museum. The new gallery will also feature many Shoshone artifacts, and tell the story of Chief Washakie and his people.

The Grand Opening will be held June 1, from 4 to 6 p.m. and the public is invited. There will be light refreshments and a ribbon cutting at 4:30.

The paintings were acquired after a two year fund-raising effort led by the Fremont County Pioneer Association. Dozens of local people and many organizations generously donated money to keep the paintings here in Lander when they were in danger of leaving the state.
The paintings were commissioned by Harold Del Monte, owner of the Noble Hotel in 1945. Del Monte, an avid historian, wanted guests to experience western history while they stayed at his hotel. He amassed a large collection of Indian artifacts, had western style furniture made to create the feeling of a mountain lodge, and used western themes throughout the hotel.

He hired Montana artist J. K. Ralston to create a series of paintings about the life of Chief Washakie, who Del Monte recognized as one of the most important Wyomingites. Ralston, then at the beginning of his career, spent time in Lander researching the landscape and clothing of the Shoshone. He then painted twenty three large scale oil paintings. The paintings cover important parts of Washakie’s life from his becoming chief, to the battle of Crowheart Butte, the coming of white settlers, the creation of the reservation and his death as a revered leader. Ralston went on to become one of the major western artists and his work is highly sought after by collectors.

When the hotel closed in 1969 the paintings went in to storage. In 2015 the trust that owned the paintings approached the Lander museum about showing them and trying to keep them in Lander. “The community really stepped up with money and time to keep this part of our history here,” said museum Curator Randy Wise. “This is a major western art collection that has so many ties to this area: The Chief Washakie story, the connection to Lander and the Noble Hotel. It is an honor to be able to finally show the people of Lander what they put their money into keeping.”

With the creation of the Washakie Gallery, the museum will also be able to dedicate more space to the Arapaho people and their story, said Wise.

For more information visit us on Facebook at Pioneer Museum Lander Wyoming or call 307-332-3373.

photo credit: One of the Ralston paintings “The Battle of Crowheart Butte.”

No category
fcmadmin
Comments are closed
252
0
0
No tags