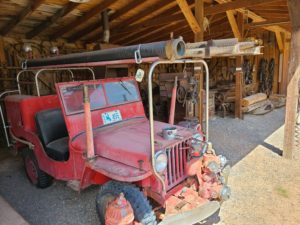 In a dry environment filled with trees, grasses, and lightning storms, it is no surprise that fighting fires has long been a concern for the residents of Fremont County.  As fires continue to be a threat to homes and livelihoods, the methods for fighting them have developed in sophistication, growing from simple bucket brigades to developing helicopters that drop thousands of gallons of retardant.

The first firefighting vehicle in the town of Dubois began its life as a Jeep.  Following their success in the Second World War, the Willys-Overland company transitioned from building military Jeeps to a civilian counterpart.  According to the company, almost 75% of American farmers did not have a truck or trailer, so the “Agri-Jeep” was meant to take the place of both vehicles.  Beyond its proposed agricultural uses, the civilian Jeep was used for hundreds of other applications, specially modified to suit each purpose.

One of the many civilian Jeep applications was for a small fire engine.  The Boyer Fire Apparatus Company in Indiana produced a variety of fire extinguishers and larger apparatus for controlling fires, and they were one of two companies that converted Willys-Overland Jeeps into fire engines.  The back of the Jeep is converted into a storage area, while two hard pipes for pumping water and a ladder are installed on top of the vehicle.  To complete the engine, a siren sits above the left wheel.  Once the Jeep Fire Engine was completed in 1947, it was sent to Kurland Motors in Denver, Colorado before working its way up to the town of Dubois.

Once it arrived in Dubois, the engine did not sit unused.  In 1951, records note that “Quick action by volunteer firemen averted what could have been a disastrous fire ….”  Even when not fully operational the engine was put through its paces, two or three people pushing the engine to get it going when the battery was out.  In 1955, a fire in the dead of night destroyed the grade school and gym buildings.  Arden and Hazel Coad remembered this event as initiating the organization of a proper Dubois Volunteer Fire Department to replace the relatively unorganized prior volunteers.  Once the new DVFD had organized and built a new fire barn, a new fire truck was bought, outstripping the Jeep in terms of capacity and utility.

Dubois’ first fire engine now sits behind the Dubois Museum and will soon be sent away for restoration.

No category
fcmadmin
Comments are closed
13
0
0
No tags