Finnis Mitchell: Lord of the Winds 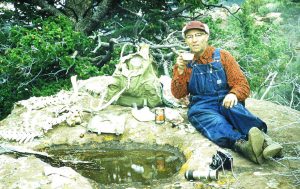 Finis Mitchell was a forester, mountaineer, outdoorsman and conservationist who came to Wyoming as a boy in 1906 with his parents.  They arrived in Wyoming in a boxcar with all their possessions and some livestock. They settled on the west side of the Wind River Range. They tried to farm on 160 acres of sagebrush near Boulder, Wyoming. Farming proved unsuccessful on the dry barren land. The family survived on antelope, fish and potatoes, and Finis fell in love with the mountains of the Wind Rivers.

To support the family, Finis’ father took a job working in the coal mines near Rock Springs. Finis’ father became ill with lung problems from working in the mines, so Finis left school in 8th grade to work in a sawmill to help support his family. He never officially returned to school, but continued to study and learn.

Finis married Emma Nelson, a teacher in a one room schoolhouse, in 1925, and they raised two children.

As a young man, Finis took a job with the railroad, but was laid off in 1930 at the start of the Depression.  Finis and his wife, Emma opened a fishing camp in the Southern Winds, but few of  the alpine lakes at this time had fish in them. With fingerlings supplied by the Wyoming Game and Fish hatchery in Daniel, Wyoming, Finis and his father packed 5 gallon buckets of fish up into the Winds and stocked the lakes and streams.  Finis estimated he planted 2.5 million trout into 314 lakes during the Depression.

After the Depression, Finis was rehired by the Union Pacific railroad, but in his free time he hiked and took photos in the Winds. Many of his photos became picture postcards sold to tourists.

Finis Mitchell served in the Wyoming House of Representatives from 1955 to 1958. Finis retired from the railroad in 1966 and continued hiking and guiding in the Wind Rivers.  He wrote a guide commissioned by the U.S. Forest Service to the trails of the Wind Rivers before he wrote his guide to the Wind Rivers, “Wind River Trails:  a Hiking and Fishing Guide to the Many Trails and Lakes of the Wind River Range in Wyoming.”  It is a 142 page book easily carried in a backpack.

In 1975, the US Geological services named a peak in the Wind Rivers, Mitchell Peak in honor of Emma and Finis.  It was very unusual to name a peak after a living people.   In 1977 the University of Wyoming awarded him an honorary doctorate for his service to conservation.

Dr. David Love, head of the USGS in Wyoming recognized Finis as the authority on the Wind Rivers. Love allowed Finis to recommend many of the names for the peaks and lakes of the Wind Rivers.

In the early 1990s, friends and I packed goats into Atlantic Lake to fish and camp.  We were joined by a fisherman from Rock Springs and his dog the next day.  We introduced ourselves because we were concerned about the dog and the goats, but the Chesapeake Bay Retriever was more interested in running to the top of a snowfield and sliding into the lake, which he did obsessively, than he was in the goats. The fisherman had caught two fine rainbows.  He gave the smaller one to us.  The larger fish he was taking to Finis Mitchell.  He had visited Finis in the nursing home, and Finis had requested one of the fish from his mountains.  Finis Mitchell died November 13, 1995 one day before his 94th birthday.

If you happened to be lucky enough to catch a fish in the Winds and cook it over a campfire, be sure to remember Finis Mitchell, “Lord of the Winds.”

Next up for the Fremont County Museum

Sept 3, Noon at the Riverton Museum, “Jim Bridger: Trailblazer of the American West” by Jerry Enzler

The Dubois Museum, the Pioneer Museum in Lander and the Riverton Museum need your financial support.  In the current economic environment, the museums are more reliant than ever on donations from the private sector to continue to provide the quality programs, collections management, exhibits and services that have become their hallmark over the last four years.  Please make your tax deductible contribution to be used specifically for the benefit of the museum of your choosing by sending a check to Fremont County Museums 450 N 2nd Rm 320 or taking it directly to the museum you choose to support.

No category
fcmadmin
Comments are closed
142
0
0
No tags