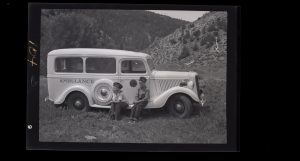 Esther Mockler titled her memoir Eighty Miles from a Doctor because that was the reality people dealt with for decades in Dubois, Wyoming. When someone asked her how one copes with living eighty miles from a doctor, Esther responded, “you become innovative and you pray.”

The Native Americans who occupied the Wind River Valley and Basin were the epitome of innovative. Not only did they adapt to living at different altitudes throughout the year, but they also used extensive plant knowledge to treat various illnesses or problems. People can find many of the plants they prescribed around the region still today, and some opt to use them in lieu of other over the counter medicines. As white settlers moved in to the valley, they contended with their fair share of breaks, bruises, and illnesses. The fur-trapping mountain men received assistance from the same plants the natives used as well as a few more “modern” remedies like mixed balms made of herbs and chemicals, handmade lancets, bottles of laudanum, or iodoform treatments.

Andy Manseau, the first permanent white settler in the Upper Wind River Valley, had his fair share of injuries and illnesses. From near drownings treated with warm campfires to blood poisoning (sepsis) treated with amputations, near death experiences filled Andy’s life. He survived thanks to the help of neighbors who either treated him with their own home remedies or drove him—by horse, wagon, or (eventually) car—to Fort Washakie. As an army station, Fort Washakie had medical staff on hand. Andy remembers receiving treatment from three specific doctors: Dr. Godfrey, Dr. Lannigan, and Dr. Francis Welty. Dr. Welty would move to Dubois and work as the town’s first resident doctor until his death in 1919.

Even when a medically trained doctors or nurses lived in Dubois, which was an irregular thing, some people still opted for home remedies. They did this sometimes out of preference, but often out of necessity. When Lydia Clark Olson went into premature labor during a winter storm while living in a remote tie camp, she only had her neighbors to assist her. When the baby arrived, tiny and weak, few people thought it would survive the night. Out of options and desperate, one woman on hand suggested they wrap the baby girl and lay her in the still-warm bread drawer of Lydia’s stove. The stove did the trick and Doris Clark lived to marry and have children of her own.

The town of Dubois got an ambulance in the 1930s, which was available for people to use in emergencies. Before then, people either rode wagons or drove their cars over the rutted gravel highway between Dubois and Lander. Finally, Mel Cooper of Riverton built the Dubois Medical Clinic on the edge of town in 1961. The Fremont County Commissioners agreed to underwrite the operating expenses of the clinic in 1969, but physicians only sporadically stayed at the clinic. Today, Dubois has more dedicated medical staff in town as well as easier transportation options for medical emergencies than ever before in its history.

(The following programs could be potentially rescheduled.  We will address each program schedule about 1 week prior to the program with an update)

Consider supporting The Dubois Museum, the Pioneer Museum in Lander or the Riverton Museum with a monetary donation.  The museums are more reliant than ever on donations from the private sector to continue to provide the quality programs, collections management, exhibits and services that have become their hallmark. Please make your tax deductible contribution to be used specifically for the benefit of the museum of your choosing by sending a check to Fremont County Museums 450 N 2nd Rm 320 or taking it directly to the museum you choose to support.

No category
fcmadmin
Comments are closed
232
0
0
No tags