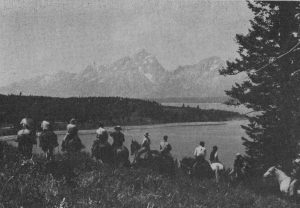 The first Boy Scout Troop in Riverton was founded in 1917/1918. There is some dispute about which year it was founded, the Riverton Chronicle reports that the troop was started in 1918 but later editions of the Riverton Ranger reported that the first troop was started in 1917. However, both news sources agree that by late 1918 the Boy Scout Troop from Riverton was up and going strong.  Some of the early members of those first troops were Franklin Sheldon, Charles Wheeler, Lawrence Hunter, Billie Warren, and many more.

At this point the Boy Scouts of America was still a fairly new organization, having only been established about 10 years prior to Riverton’s First troop. Never the less, the Folks in Riverton were convinced a troop would do the younger generations good. Through their persistence a Scout Movement was founded. One of the first projects of this early Scout Troop was to play a role in the war effort in Riverton during the First World War. The Scouts would help to sell Liberty Bonds around Fremont County.

The first Scout Master of record was Mr. A. L. Arnold; however, before him there was Rev. Phillips of the Baptist Church in Riverton. The Reverend was the unofficial Troop leader for the first year or so. After he became the Scout Master, A. L. Arnold helped to organize bonds that were sold to many Main Street business owners to help fund the first Boy Scout building. Many of the Scouts themselves helped to build this early building.

By 1923 The Riverton troop was able to send ten Scouts to summer camp at Camp Kemp in the Big Horn Mountains located about twenty-five miles from Arminto. A year later in 1924 sixteen Scouts attended camp at Camp Carrey on Box Elder creek in Casper Wyoming.

The early Boy Scouts would spend time camping on North Fork and hiking out in Milford. Later camps were on Rock Creek near Atlantic City. In 1975 the Boy Scouts hosted one of the largest Spring Camporee’s in the Wind River Campground, just north of the Boysen Dam. The troops present at this Camporee included Troop 89 of Lander, Troop 45 of Cody, Troop 45 of Worland, Troop 38 and Troop 2 of Casper, and more.

The early Boy Scout Movement in Riverton proved to be a huge success, teaching boys from around the county many Scouting Skills that they could and would use even later in life.

In the words of Ira J. Bureson, “Boys will be boys-but they need not be juvenile delinquents. The Boy Scout Movement has proved that they will not be if given the right leadership.”…“Let us not forget that the Boy Scout Movement trains boys to be of help instead of a nuisance at a fire.”

Feb 10th, 6pm at the Dubois Museum, “What are All the Lights in the Winter Sky”

Feb 17th, 3pm at the Riverton Museum, “History of the Delfelder”

The Dubois Museum, the Pioneer Museum in Lander and the Riverton Museum need your financial support.  In the current economic environment the museums are more reliant than ever on donations from the private sector to continue to provide the quality programs, collections management, exhibits and services that have become their hallmark over the last three and half years.  Please make your tax deductible contribution to be used specifically for the benefit of the museum of your choosing by sending a check to Fremont County Museums 450 N 2nd Rm 320 or taking it directly to the museum you choose to support.

No category
fcmadmin
Comments are closed
233
0
0
No tags