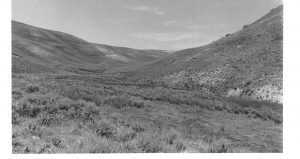 The Bates Battle was fought on the Fourth of July in 1874.  The battle was fought between a band of Arapaho, who were camping on a grassy slope near Bates Creek, and men from the 2nd Cavalry lead by Captain Alfred E. Bates.  There are a few accounts of what took place at the Bates Battle, but there are discrepancies between each account.  These discrepancies are related to the motives for the battle, the events during the fight, the number of Arapaho who were attacked, and the losses suffered by both sides.  The main sources used in the National Register of Historic Places application to describe the battle were reports made by Captain Alfred E. Bates, Brigadier General Frank Robinson, and Assistant Surgeon Thomas G. Maghee.  There is little written about the Bates Battle from the point of view of the Arapaho, who were on the opposing side of the Bates Battle.

Events leading up to the beginning of the Bates Battle created an environment of heightened tension between the Shoshone and their traditional enemies, the Northern Arapahoe.  Until the late 1860’s, the traditional lands of the Shoshone were centered around the Upper Green River.  The Northern Arapahoe were settled mainly to the southeast of the bend of the North Platte River.  On July 3rd, 1868, Chief Washakie, from the Eastern Shoshone, signed a treaty that outlined what is now known as the Wind River Reservation.  However, the reservation we have today is much smaller than what was agreed upon in 1868n due to more treaties and successions.  The new reservation moves the Eastern Shoshone to land around the Upper Wind River, which brought them to lands that had been traditionally occupied by their traditional enemies, the Northern Arapahoe.

The Northern Arapahoe formed temporary alliances with the Sioux and the Northern Cheyenne, who were also traditional enemies of the Shoshone, to stage sporadic raids due to the Eastern Shoshone’s new claims on their territory.  As a result of the increased raids, Chief Washakie asked the United States Government to provide protection from the Northern Arapahoe and their allies.  As a result, Camp Augur was established on July 28th, 1869, where present day Lander is located.  In 1870, Camp Augur was moved to the Junction of the North and South Forks of the Little Wind River and was renamed Camp Brown.  Again, on December 30th, 1878, the government renamed Camp Brown as Fort Washakie in honor of their ally, Chief Washakie, of the Eastern Shoshone.

During late June of 1874, bands of Northern Cheyenne and Northern Arapaho were reported to be raiding the Shoshones who were settled near Camp Brown.  In addition, there were reports of horses and other livestock being stolen from the settlers living in the area.  Second Lieutenant Frank U. Robinson from the Second Cavalry described the situation as follows:

They could dash in and kill someone, steal what stock they could and then ride hard for their own country.  After putting in 75 or 100 miles they were perfectly safe.  Our only chance of punishing them was to overhaul them before they could get well out of our lines.  That was next to an impossibility for they would usually commit their depredations from 20 to 50 miles from our camp and, by the time we received word and got fairly on their trail, they would be well out of the country.  Our force was entirely too small to go further than 60 or 75 miles into the hostile country.  Our force at Fort Washakie at this time was Company E, 13th Infantry, Troop B, 2nd Cavalry, and 20 Snake (Shoshone) scouts, a force entirely too small, situated as we were directly west of the vast Sioux country in which all the Sioux and hostile Cheyennes and Arapahos were congregated.  It is true we had at this point the Snake Indians as our allies, as they were always deadly enemies of the Sioux, but they numbered, I am quite sure, not more than 300 warriors who were not fond of going very far into the Sioux country.  I was resolved to make the best of what we had and give the hostiles a lesson teaching them that they could not raid into our line of country with impunity.

Captain Bates asked Chief Washakie to use his scouts to find the bands of Cheyenne and Northern Arapaho who were conducting the raids and warn him of any upcoming raids.  On June 29th, 1874, a group of high-ranking army officers arrived at Camp Brown on a tour of inspection.  During the visit, a group of Shoshone scouts returned to Camp Brown to report a camp of Native American lodges ranging in number from 40 to 112 lodges and two thousand head of horses located in a valley near what is now known as Bates Creek.  At the time, the residents of the lodges had not been identified, but they were later identified a group of the Northern Arapaho.  Since the Northern Arapaho claimed the same land occupied by the Shoshones, their presence near Camp Brown was not surprising.  There are two recorded theories about why this band of Arapahoe were camped near Bates Creek.  The first theory was that Arapahoe and their allies had parted ways due to disputes over the objectives of the raids against the Shoshone.  So, the Sioux and Cheyenne went north and then headed west to head back to Camp Brown, leaving the Arapahoe behind at their camp.  The second theory was that the three tribes had met to celebrate the Sun Dance together.  So, the Arapahoe were either going to meet up with their allies for the Sun Dance or were returning home after the Sun Dance.

Soon after the announcement made by the Shoshone Scouts, an application was made to Indian Agent James Irwin to allow the Shoshone to assist the Army in an offensive against the camp of Arapahoe lead by Captain Bates.  On July 1st, 1974, Company B, which included 63 Cavalry men, 20 Shoshone scouts and white civilian scouts under the command of Lieutenant R.H. Young, the 4th Infantry, and 167 Shoshone Indians lead by Chief Washakie, acting Assistant Surgeon Thomas Maghee, the Assistant Surgeon’s assistants, and a pack train of ten mules left Camp Brown moving along the Little Wind River.  The group lead by Captain Bates only traveled at night to avoid detection from the camp of Arapaho reported by the Shoshone scouts.  By daybreak on the Fourth of July, the group had arrived at the reported location of the Arapahoe village, but found the location to be empty.  After a short survey by the scouts, the village was located about a mile and a half in the direction from which the troops had just traveled.  After backtracking along the trail, the troops were halted about halfway back to the camp by Captain Bates, who then rode ahead to survey the location of the camp and develop a plan.

The plan was for Bates to lead 30 of his men and about twenty Shoshones down the grassy slope into the village, while Lieutenant Young and his scouts would approach from the upper end of the village to prevent the villagers from securing a position on the bluff.  At first, the attackers had the advantage, and the battle was intense.  Later the Arapaho’s scaled the bluff and opened fire on the Army and the Shoshone located below them.  After a while, Captain Bates withdrew his men from the village, sent for the troops’ horses, and climbed above the battleground to observe.  Then, Bates learned that Lieutenant Young was wounded on the opposite side of the ravine and was being encircled by the Arapaho.  After Lieutenant Young was rescued by some scouts, Bates withdrew his forces from the battle and began the long march back to Camp Brown.

The reports of the Bates Battle’s aftermath state that the attackers had four dead and four to five wounded.  For the Arapaho’s, there were somewhere between 10 to 125 casualties.  In the end, the surprise attack meant to destroy the Arapaho’s camp and to drive away its occupants was not completely successful.  Although, the Arapaho experienced a large human loss, they maintained control of their village and the attackers were forced to retreat.  The troops were also unable to drive away or steal the villager’s horses, which would have been a blow to the Arapaho’s ability to defend themselves.  According to the reports, the loss was blamed on the Army’s allies, the Shoshone.  Bates claimed that he knew the importance of the bluff on the other side of the village and stated that he would have been able to occupy the bluff, had the Shoshones been quiet.  He explained that he was afraid to try to gain the height before mounting the attack because he believed the Shoshone’s would have aroused the village before he could advance.  In addition, Bates accused the Shoshone of cowardice during battle.  According to Bates’s report, his instructions to the Shoshones were to follow him and his men down into the ravine and cut off the Arapahoe so they could not reach the bluff.  The report written by Brigadier General Frank Robinson claimed that the Shoshone stopped in the middle of the hill and fired over the head’s for Bates’ men.  However, Indian Agent James Irwin defended the Shoshone by explaining that the interpreter could not translate accurately because Bates was talking too fast.  Bates’ attempt to blame the Shoshone was not supported or denied by Lieutenant General Phillip Sheridan, who was one of the high-army officials on the tour of inspection.  General Sheridan’s report declared the battle a success and praised Bates for moving promptly and completely routing the enemy.

After the battle, the Arapahos moved back to the Red Cloud Agency located in Nebraska.  Two bands of Cheyenne and Arapahos then sent a delegation to Fort Fetterman asking if the soldiers wanted war.  General Sheridan replied with a yes and stated that “we would kill as many of them as we could, unless they stopped their depredations and returned to their agency.”  In late 1877, almost 1,000 Arapaho were authorized by the United States Government to settle in the eastern half of the Wind River Reservation temporarily.  Chief Washakie knew that this arrangement was a long-term, but he continued to ask for the Arapaho to be removed from the reservation.

The Dubois Museum, the Pioneer Museum in Lander and the Riverton Museum are seeing significantly decreased visitation this summer as a result of Covid-19.  As a result, the self-generated revenue we rely so heavily on to make ends meet is not keeping pace.  We are counting on private donations to continue to maintain successful and engaging museums during this time.  We urge you to make a tax deductible contribution to be used specifically for the benefit of the museum of your choosing by sending a check to Fremont County Museums 450 N 2nd Rm 320 or taking it directly to the museum you choose to support.

No category
fcmadmin
Comments are closed
176
0
0
No tags