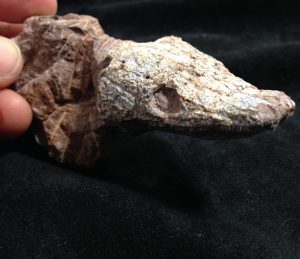 Beginning in 2013, University of Wisconsin-Madison's Geology Museum researcher Dr. David Lovelace began exploring the classic red rocks of the Triassic aged (~252-201 mya) Chugwater Group that are well exposed along the eastern flank of the Wind River mountains. These outcrops stretch from south of Lander all the way up to Dubois. The Late Triassic Popo Agie Formation is the uppermost unit of the Chugwater Group and is thought to be around 230-225 million years old. This formation is named after the Popo Agie River near Lander and it preserves extraordinary fossils that represent an ancient terrestrial ecosystem that thrived during the dawn of the dinosaurs.

Lovelace, along with UWGM students have discovered a number of new specimens on both private and public lands throughout the region. Most of the fossils are still being extracted from the rock that has preserved them all this time. A new skull of a phytosaur - an ancient crocodile-like animal - was found on private land near Lander in 2013; it has been more than half of a century since the last phytosaur discovery in the state!

In 2014-2015 two sites were discovered near Dubois on public lands held in trust by the Bureau of Land Management. During the 2016 field season excavation was started and continued again this summer. Both of these sites preserve a mass-death assemblage of ancient temnospondyl amphibians that are most closely related to caecilians, a group of modern legless amphibians. The first site (known as Nobby Knob) has dozens of partially articulated skeletons of giant temnospondyls called Koskinonodon; these animals roughly resemble 6 foot long giant salamanders! The second site (known as Serendipity) preserves hundreds of burrows about the diameter and shape of a Pringles can, many of which preserve articulated skeletons of a new tiny temnospondyl species. 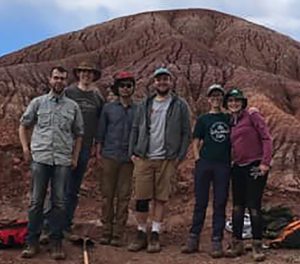 This year the UW-Madison crew, led by Ph.D. student Aaron Kufner and Calvin So, are spending nearly 2 months documenting and excavating the Nobby Knob and Serendipity sites. Eventually the material that is being collected will be prepared and studied at the UWGM, and will be highlighted in the museum's gallery. It will take years to complete the preparation (it takes about 12-15 person-hours of lab work for every person-hour in the field). Future collaborations with the Fremont County Museums are being developed, so stay tuned!

No category
fcmadmin
Comments are closed
232
0
0
No tags