New Tobacco Exhibit at the Pioneer Museum In Lander 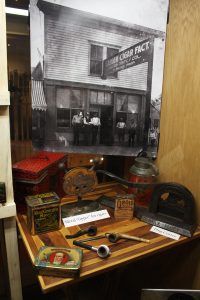 It may be hard to believe now, but for many years tobacco smoking was not only encouraged, it was touted as a healthy thing to do.  An ad in the 1908 Lander Journal read, in part: “Tobacco a Germ Killer! The cigar made at the factory of Wm. R. Henneker, Lander, will protect you from germs of the disease of cholera.”

The exhibit was spurred by the donation of a large collection of antique tobacco tins by Lander resident Rex Phipps. “We had wanted to do something on the Lander Cigar Factory, a fixture on Main Street in the early 1900s,” said Curator Randy Wise. “The generous donation of the tins, along with items already in the collection, gave us the bones of a very interesting display.” Wise said the museum tries to generate new exhibits every few months and that a major art exhibit on the American Bison was coming in November.

Tobacco was used by many people and sold in most stores. Chewing tobacco, pipes, cigars and cigarettes were sold next to jaw breakers, lolly pops, chewing gum and other sweets at Sadie Pittman’s Candy Store in the 200 block of Main Street.

Tobacco would have been sold in Lander shops from the time there were merchants. The first trading posts would have carried an ample supply of tobacco, often loose or in large dry plugs, to supply cowboys, farmers and freighters.

The tobacco, grown in the southern United States, or the Caribbean, and shipped West, arrived in Lander by freight team along with all the other goods unavailable on the frontier.

While stores could get tobacco from large suppliers like Stag or Beech Nut, many small entrepreneurs decided to import their own leaves and make local cigars. Lander was no exception. In 1905 M. Anson moved from Casper and opened the Lander Cigar Factory. The operator of the factory was  John Zank who reported in June 1905 that he was hiring more workers to make cigars “as the Lander factory has all the patronage it can handle. The Lander cigars are very popular and deservedly so.”

The factory building was the Thompson Building (which is now located at the museum complex). The factory was purchased by William Henneker, who  imported tobacco from Havana, Cuba and    Sumatra to make cigars. Eventually Henneker got out of the cigar making business, but he continued to sell cigars and other tobacco products in his store on Main Street.

The museum, located at 1443 Main in Lander is open Monday through Saturday from 9 to 5. For more information call 307-332-3373, visit the web a www.fremontcountymuseums.com or on Facebook at Pioneer Museum Lander Wyoming.